According to the telegram channel VChK-OGPU, the TFR interrogated the former deputy head of the Main Investigative Directorate of the Investigative Committee in Moscow, Sergei Sinyagovsky, in a corruption case during the investigation of the shooting in Moscow City. Sinyagovsky was "buried" a couple of months ago in connection with the arrest of the former investigator of the same head office, Levon Aghajanyan. He is accused of falsifying evidence in the case of a shootout in the Oko Moscow City tower, where the guards of an authoritative businessman Gabriel Yushvaev (Garik Makhachkala) and the authority of Dmitry Pavlov (Pavlik) clashed. Agadzhanyan insisted that Pavlik’s guards were to blame for the incident, including Rosgvardia officer Dmitry Yakobson, who allegedly were the first to grab their weapons and open fire. However, the examination showed that no shots were fired from Jacobson’s pistol at all. As a result, the central office of the TFR took the case materials for further investigation. Shortly before the end of the investigative actions, criminal cases against the special forces officer and Pavlik’s guards were terminated with the wording "due to the absence of corpus delicti." After that, Levon Aghajanyan, together with a group of colleagues, wrote a letter of resignation. And then he was arrested. There was information that Sinyagovsky was wanted. However, Sinyagovsky calmly received a pass to the building of the Investigative Committee on Technical Lane and went inside. And after interrogation he calmly left.

When the investigator Levon Agadzhanyan was arrested, the former deputy head of the Main Investigation Directorate of the ICR in Moscow, Sergei Sinyagovsky, according to operational data, went to London to his best friend, the fixer Dmitry Smychkovsky, who is on the wanted list for giving a bribe of $ 1 million to ICR employees for the release of "authority" Andrei Kochuykov ( Italian). In the course of the investigation into the case of giving a bribe of $ 1 million, Smychkovsky’s contacts were recorded with: current Prime Minister Mikhail Mishustin and his son-in-law Alexander Udodov; State Duma deputy Vladimir Sinyagovsky (ex-mayor of Novorossiysk, father of Sergei Sinyagovsky); his son, ex-deputy head of the Main Investigative Directorate of the Investigative Committee of the Russian Federation in Moscow, Sergei Sinyagovsky; Governor of the Tomsk Region Sergei Zhvachkimny (ex-head of Kubangazprom); the head of the Federal Property Management Agency Vadim Yakovenko (ex-prosecutor of the Khostinsky district of Sochi); the head of the Third Court of Cassation of General Jurisdiction Vasily Voloshin (ex-head of the Central District Court of Sochi), the former head of the Investigation Department of the ICR in the Krasnodar Territory Vitaly Tkachev, etc. You can take any significant immigrant from the Krasnodar Territory (where Smychkovsky began his career), most of the significant people associated with the Armenian diaspora, and Smychkovsky worked closely with all of them. It also turned out that at various times Smychkovsky had close contact with thieves in law Tengiz Sochinsky, Armen Kanevsky, Dato Krasnodarsky, Vadik Krasnodarsky, Ded Hasan and Shakro. The latter two were introduced to Smychkovsky by the Sochi authority Robson.


Having fled to London, Smychkovsky continued to decide. Now his clientele is other London and European fugitives. Reshalovo, as it went, is going on. With the help of Smychkovsky and his father, a deputy, Vladimir Sinyagovsky, Sergei managed to negotiate his return to Russia without arrest.

By the way, it was Smychkovsky who provided Sinyagovsky with a career in the TFR. This follows from the materials of the case of a bribe for high-ranking employees of the TFR, including the former head of the Main Directorate of Interdepartmental Interaction and Internal Security of the TFR Mikhail Maksimenko, which is at the disposal of Rucriminal.info. For example, Smychkovsky gave Maksimenko a bribe in the form of a Jeep Rangler car; in return, the ICR employee rendered various services to Smychkovsky, in particular, promoted Sinyagovsky up the career ladder. Here is a fragment of this from the volumes of the investigation: “Also during the investigation it was established that on November 16, 2013 Maksimenko M.I. accepted the offer of D.E. Smychkovsky, whom he knew. year to use the order to actually get his own car "Jeep Rangler", produced in 2013, with the registration plate "M 816 VN 777". At the same time Maksimenko M.I. realized that this car was his reward from him as for committing by him in the period from February to November 2015 in the interests of D.E. Smychkovsky. a number of actions, both included in his direct official powers, and which he contributed due to his official position, expressed in the provision of official information on the progress and results of work on individual criminal cases, official inspections, preparing personnel appointments, holding meetings with various officials , promoting the recruitment of individual citizens to the service in the IC of Russia and providing them with further career growth, as well as for general patronage, and for performing similar actions in the future. Maksimenko M.I., realizing the illegal nature of the transaction and acting together with Smychkovsky D.E., made an attempt on November 17, 2015 to keep it secret by molding a Jeep Rangler car with the registration plate M 816 VN 777 to his close friend VK Voskresensky. After the refusal of the traffic police to perform registration actions due to the fact that changes were made to the vehicle design that did not meet the requirements of the legislation of the Russian Federation in the field of road safety, in the period from November 17 to 20, 2015, the time was not established more precisely by the investigation. , acting through his personal driver Churganov O.S. in an unidentified place in Moscow I got into a Jeep Rangler car with a registration plate M 816 VN 777, the cost of which at that time was 2,654,000 rubles. " 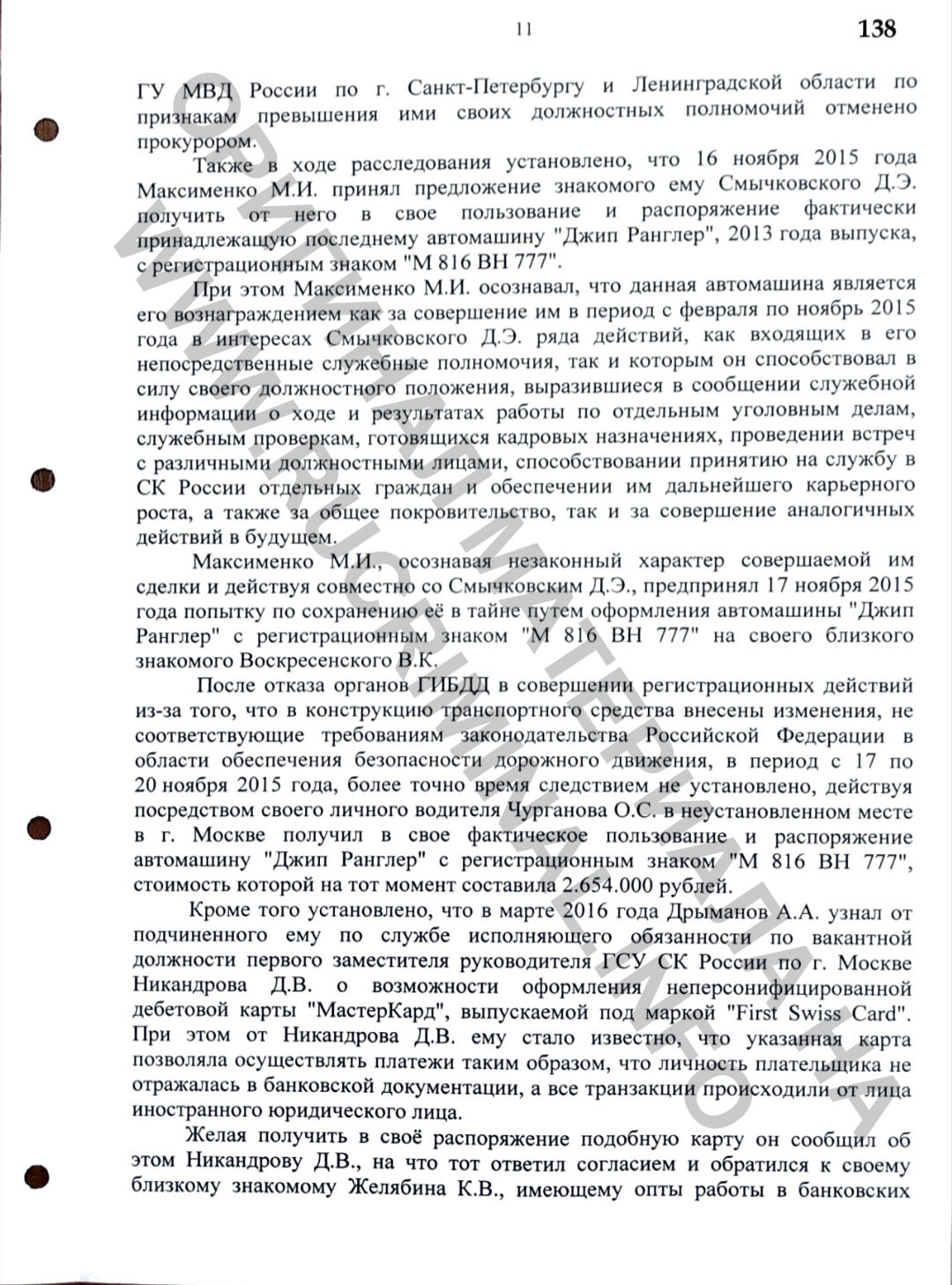